On the day exactly, five years since his dad’s passing, René Richter prepared five attempts to break world records. However, due to the slope of the floor in the hall in Budišov nad Budišovkou, he did just three.

“Today it will be about the bite!”, said the forty-four-year-old strongman from Hlavnice near Opava called Golem at LaborTech company headquarters. He took pride in the fact that in the US, Staley’s Super Humans TV show had seen his teeth grip “stronger than the alligator” some time ago.

The last time he visited at the dentist was in the first year of his training as a cook many years ago, but even so, in 51:13 seconds, he managed to lift five 1-metre-long concrete curbs, each weighing 82 kilograms. And his coach, Jiří Týn, was hammering them. He smashed four = a record! 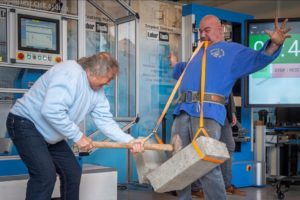 “I don’t feel pain. But I brush my teeth regularly and properly, I have a wife, I don’t want her to run away from me…”, said Golem, whose advertising of Viking’s healthy teeth is also remembered in Sweden. He pulled a tram in Stockholm with his own teeth back then.

The second Budišov record was to grind five 2€ coins in 56:20 seconds. He pressed out the outer ring from the inner fillings. “Here’s the hard currency. Euros tend to break, while Czech 50s are softer and rather bend”, he said.

Golem described his abilities as “a gift from God.” He started to entertain himself with power performances more than twenty years ago; during that time he became quite established in the Guinness Book of Records. “I practice and eat …” said the strongman working as a chef at the Relax Boarding House in Podlesí.

As the third record, he planned to bite beer cans in two pieces. “I have respect, but I want to manage that,” he said before the most impressive number. He ripped the aluminium containers like a machine and he destroyed thirty-one within 56 seconds. He cut his mouth just a little.

“I planned it as my dad’s memorial, who supported me vastly and left us forever five years ago,” Golem explained. He has already sent video recordings and witness signatures to the World Record Company for recognition.

However, both pulling of a fifteen-ton truck in the teeth for five meters and an attempt to carry the same colossus in a way of arm wrestling style did not take place. “There is no flat floor,” said the strongman, who moved the truck at least a little as a training and for the amusement of the onlookers.

Want to join the discussion?
Feel free to contribute!

ROBOTIC WORKSTATIONS FOR MECHANICAL TESTS
Scroll to top
Manage cookie acceptance
To provide the best possible service, we use technologies such as cookies to store and / or access device information. Consent to these technologies will allow us to process data such as crawling behavior or unique IDs on this site. Disagreement or withdrawal of consent may adversely affect certain features and functions.
Manage options Manage third parties Manage vendors Read more about these purposes
Show preferences
{title} {title} {title}